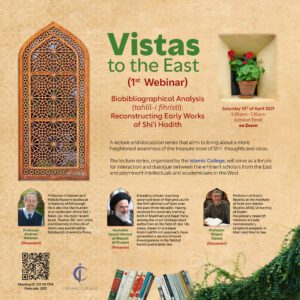 Biobibliographical Analysis (taḥlīl-i fihristī):
Reconstructing Early Works of Shiʿi Hadith
Ayatollah Sayyid Ahmad Madadi (Presenter)
Prof. Andrew Newman (Discussant)
Prof. Robert Gleave (Discussant)
Vistas to the East is a new lecture and discussion series that aims to bring about
a more heightened awareness of the treasure trove of ideas in the Islamic and Shi’i context.
The lecture series, organised by the Islamic College, will serve as a forum for interaction and dialogue
between the eminent scholars from the East and prominent intellectuals and academicians in the West.
Ayatollah Madadi is a leading scholar who has been offering lectures on advanced Islamic law (fiqh) and legal theory (usul) in the Shi’i seminary of Qom over the past three decades. Having received his seminary training in Mashhad and later in Najaf, he has now emerged as one of the distinguished authorities in the field of rijal. His views, formulated based on a historical/fihristi approach, have generated a variety of novel investigations in the field of hadith and Islamic law.
Andrew Newman is Professor of Islamic and Middle Eastern studies at University of Edinburgh. He is also the the founder and moderator of the Shi`i News list. His most recent book, Twelver Shi`ism: Unity and Diversity in the Life of Islam, was published by Edinburgh University Press.
Robert Gleave is Professor of Arabic Studies at the Institute of Arab and Islamic Studies (IAIS), University of Exeter. His primary research interests include hermeneutics, scriptural exegesis in Islam and Islamic law.
https://zoom.us/j/3131107214?pwd=Nm9weW11WHBRRnA4cVFCRWl4TDZ6Zz09
Meeting ID: 313 110 7214
Passcode: 2021 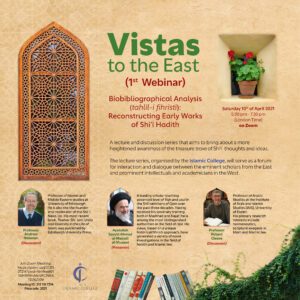