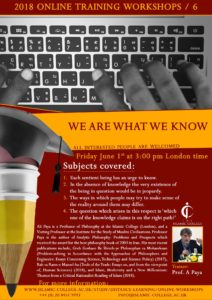 Educated at the Sharif University of Technology (Electronic Engineering), University of Tehran (Philosophy) and the University of London (UCL) (Philosophy of Science), Ali Paya is a Professor of Philosophy at the Islamic College (London), Professor of Philosophy of Science at the Sciences and Research Branch, Islamic Azad University (Tehran), Professor of Philosophy at the Department of Futures Studies, National Research Institue for Science Policy (Iran), and a Visiting Professor at the Institute for the Study of Muslim Civilisations. Professor Paya is the author of Analytic Philosophy: Problems and Prospects which received the award for the best philosophy book of 2003 in Iran. His most recent publications include, Iraq, Democracy, and the Future of the Muslim World (co-editor 2012), The Misty Land of Ideas and the Light of Dialogue: An Anthology of Comparative Philosophy: Western & Islamic (editor, 2014), A Critical Pathology of the Social Sciences and Humanities in Iran (co-author, 2015), Analytic Philosophy from a Critical Rationalist Point of View (2016), Habermas and Iranian Intellectuals (co-author 2016), Greh Goshaee Be Shiveh-ye Philosophan va Mohandesan (Problem-solving in Accordance with the Approaches of Philosophers and Engineers: Essays Concerning Science, Technology and Science Policy) (2017), Rah va Rasm-e Manzel-ha (Tools of the Trade: Essays on, and from the viewpoint of, Human Sciences) (2018), and Islam, Modernity and a New Millennium: Themes from a Critical Rationalist Reading of Islam (2018).