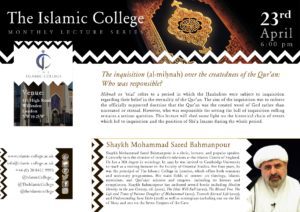 The inquisition (al-miḥnah) over the createdness of the Qur’an: who was responsible?

Miḥnah or ‘trial’ refers to a period in which the Ḥanbalites were subject to inquisition regarding their belief in the eternality of the Qur’an. The aim of the inquisition was to enforce the officially supported doctrine that the Qur’an was the created word of God rather than uncreated or eternal. However, who was responsible for setting the ball of inquisition rolling remains a serious question. I will shed some light on the historical chain of events which led to inquisition and the position of Shi’a Imams during the whole period.

Shaykh Mohammad Saeed Bahmanpour is a cleric, lecturer, and popular speaker. Currently he is the director of interfaith relations at the Islamic Centre of England. He has a MA degree in sociology. In 1999 he was invited to Cambridge University to teach as a visiting lecturer in the Faculty of Oriental Studies. For four years, he was the principal of The Islamic College in London, which offers both seminary and university programmes. His main fields of interest are theology, Islamic mysticism, and Qur’anic sciences and exegeses, including its history and compilation. Shaykh Bahmanpour has authored several books including Muslim Identity in the 21st Century, ed. (2001), The Idols Will Fall (2010), The Blessed Tree: The Life and Times of Fatima Daughter of Muhammad (2011), Towards Eternal Life (2015), and Understanding Sura Yāsīn (2018) as well as screenplays including one on the life of Mary and one on the Seven Sleepers of the Cave.

OPEN TO: All are welcome!