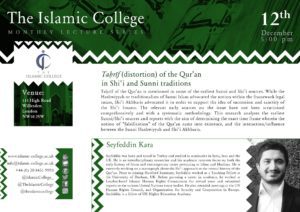 Taḥrīf (distortion) of the Qur’an in Shiʿi and Sunni traditions

Taḥrīf of the Qur’an is mentioned in some of the earliest Sunni and Shiʿi sources. While the Hashwiyyah or traditionalists of Sunni Islam advocated the notion within the framework legal issues, Shiʿi Akhbaris advocated it in order to support the idea of succession and sanctity of the Shiʿi Imams. The relevant early sources on the issue have not been scrutinised comprehensively and with a systematic methodology. This research analyses the earliest Sunni/Shiʿi sources and reports with the aim of determining the exact time frame wherein the notion of “falsification” of the Qur’an came into existence, and the interaction/influence between the Sunni Hashwiyyah and Shiʿi Akhbaris.

Seyfeddin was born and raised in Turkey and studied in seminaries in Syria, Iran and the UK. He is an interdisciplinary researcher and his academic interests focus on both the early history of Islam and contemporary issues pertaining to Islam and Muslims. He is currently working on a monograph about the Shiʿi approach to the textual history of the Qur’an. Prior to joining Hartford Seminary, Seyfeddin worked as a Teaching Fellow at the University of Durham, UK. Before pursuing a career in academia, he worked at London-based Islamic Human Rights Commission for several years and submitted reports to the various United Nations treaty bodies. He also attended meetings at the UN Human Rights Council, and Organization for Security and Cooperation in Europe. Seyfeddin is a fellow of UK Higher Education Academy.