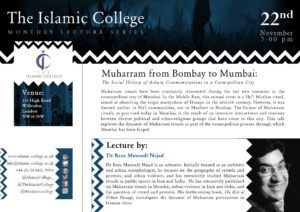 Muharram from Bombay to Mumbai:
The Social History of Ashura Commemorations in a Cosmopolitan City

Muharram rituals have been constantly reinvented during the last two centuries in the cosmopolitan city of Mumbai. In the Middle East, this annual event is a Shi‘i Muslim ritual, aimed at observing the tragic martyrdom of Husayn in the seventh century. However, it was limited neither to Shi‘i communities, nor to Muslims in Bombay. The format of Muharram rituals, as practised today in Mumbai, is the result of an intensive interactions and tensions between diverse political and ethno-religious groups that have come to this city. This talk explores the dynamic of Muharram rituals as part of the cosmopolitan process through which Mumbai has been forged.

The idea is to articulate how urban society and colonial authorities negotiate through religious practices, a negotiation that can be considered as one of the principles of the cosmopolitan process. This process is not only about the migration of people to a city; it is intrinsically about encountering diverse ethnic, religious, and political groups who co-habit in a place and negotiate social and political relations through different practices, including rituals. The significance of the Muharram rituals in the cosmopolitan process of Mumbai was due to the fact that the ritual was the most important and the biggest festival in Bombay until the early twentieth century.

Dr Reza Masoudi Nejad is an urbanist. Initially trained as an architect and urban morphologist, he focuses on the geography of crowds and protests, and urban violence, and has extensively studied Muharram rituals in public spaces in Iran and India. He has extensively published on Muharram rituals in Mumbai, urban violence in Iran and India, and the question of crowd and protests. His forthcoming book, The Rite of Urban Passage, investigates the dynamic of Muharram processions in Iranian cities.