The Islamic College heartily congratulates the winners of the 2015-16 awards!

The Awards Committee chose Yasmin Ahmed’s work, titled Transcending Idiosyncrasy: An Investigation into the Appropriation of Islam by Muslims, as the winner of the Ibn Sina Award for best MA Dissertation. Yasmin is pictured below receiving her award – comprising a plaque and the sum of £300 – from the Director of Research and Publications, Shaykh Mohammed Ali Ismail. 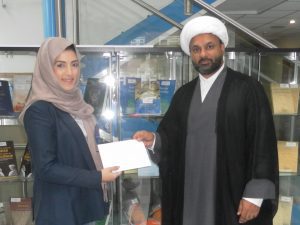 Susan Khwaja won the Abu Rayhan al-Biruni Award, which is given for the best BA Project. Winners of this award receive a plaque and the sum of £200. Susan’s work was titled A Critical Comparative Analysis of the Development of Headwear Worn by Male Shi‘i and Sunni Clerics. She is pictured below (left) with Fatema Muraj, the BA Academic Registrar. 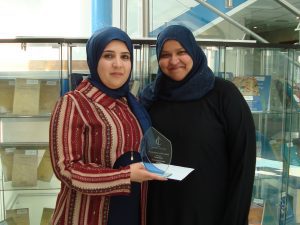 A student whose work is published in the student journal of College, Islamic Writings, wins the Shaykh Mufid Award and receives £50. This year’s winners were: